Music has often a paved way to the thought process of an entire generation. Be it John Lenon and The Beatles and The Doors which promoted the hippie culture to the entire punk generation of the 70s influenced by the sheer number of punk bands of that time, music has defined the style, thinking and the entire movements. While we see the music taking over generations in the 20th century, there was a gentleman that single-handedly defined music in the 19th century and came to be known as “Father of American Music” and rightfully has a Memorial day named after him where so many people across the world wear in memory of wristbands for him on 13th January. 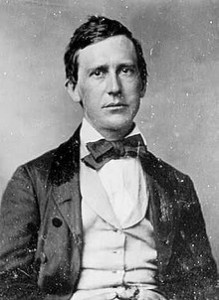 Stephen Collins Foster the greatest songwriter of his time, has attained the legacy of having his music still heard 150 years after his demise. Born on 4th of July 1826 Stephen Foster attained his earliest training in music from a German immigrant Henry Kleber. He was known to sing the poetry for African American portion of society; a daring act, at a time when slavery was a serious and controversial issue. Showing his might at a tender age of 14, he composed his first song called ‘Tioga Waltz’. His first ever published song was called ‘Open thy lattice love’ in 1844 and since then he wrote life-changing songs which are still sung to this day. Songs which have crossed the boundaries of time by him were:

His most notable track, Oh! Susanna was an anthem during the California Gold Rush. Stephen Foster died on 13th January 1864 when he fell, weak with fever. Shortly after his death, one of his most beloved song ‘Beautiful Dreamer’ was published.

On 13th January every year people celebrate Stephen Foster Memorial Day as an observance. People usually celebrate it with appropriate ceremonies, pilgrimages to his shrines and by holding musical programs which feature his compositions.

For his contributions in music, University of Pennsylvania honored him with a Stephen Foster memorial a landmark house to Stephen Foster museum, center for American music and two theaters: Randall and Henry Heymann.

A man of such stature and talent is till date celebrated as one of the best musician of his time. Notable in 2005 an album called “Beautiful Dreamer: The songs of Stephen Foster” won the Grammy performed by various artists more than 150 years after his death.

Recollect the Memories of Stephen Foster

This memorial day for Stephen Foster, hold each other’s hands and lets remember him once again. Order custom wristbands in memory of Stephen Foster from wristbandbuddy.com from our ‘In memory of wristbands section to celebrate the life and times of those who make an impact on the world and in our lives like none other do.

Copyright 1999-2015 by WristbandBuddy. All Rights Reserved.